We can convert your empty van into a fully functioning service vehicle with our modular van racking systems and van shelving. We offer a complete van conversion service, which in addition to indispensable van racking can include modular floors and van liners, vehicle electrical systems, accessories, vehicle graphics and livery.

We fit racking solutions to a wide range of vans and commercial vehicles including LCVs, MCVs and pick-up trucks. No matter which business sector you operate within, or what you drive, we have a van racking system to suit your business, whether for a single van or a fleet of vehicles. 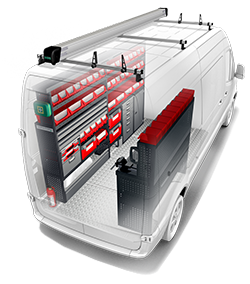 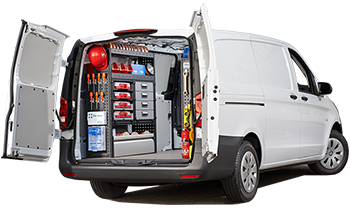 Customize a kit for your van

We are offering a range of pre-designed kits, tailor-made for each vehicle.
Please select your vehicle below to view the solutions available. 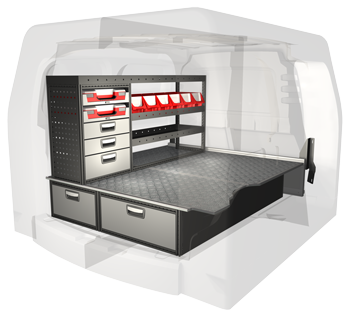 For light commercial vehicles in the smaller segment, double floor solutions are becoming increasingly popular. This as they maximize the utilization of the cargo space.

Extra-long drawers, intended for heavy and bulky cargo, are installed under the double floor. Each drawer has a load capacity of 80 kg, alternatively 100 kg if a rubberized insert is used. The drawers can be extended about 80 per cent and the ball bearing solution makes them both stable and easy to operate. Smart accessories contribute to increased functionality.

The double floor is installed on top of the drawers. For best possible combination of lightweight and robustness, the floors are manufactured from a sandwich material with aluminum on the top and bottom. Edging strips in aluminum are included for a nice finish.

The double floor has integrated cargo rails, which can be used for the fixation of van racking or to secure cargo. Modul-System offer lashing eyelets which are extremely robust and which easily can be moved.

MAXIMIZED UTILIZATION OF THE CARGO SPACE 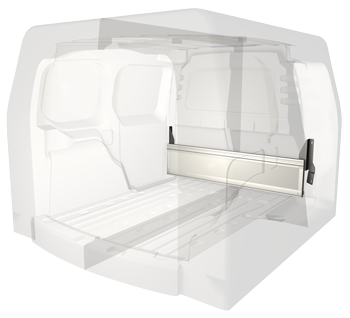 For safety reasons, heavy and bulky items are kept in long drawers beneath the double floor. Each drawer is equipped with a CRP (Crash Restraint Panel) which prevents loads from being propelled forward in the event of an accident.

When the double floor solution is installed in the vehicle, it is done with safety in mind. The drawers are fixed with a certain distance in between products to create built-in deformation zones, which prevents them from being pushed into the bulkhead in the event of a rear-end collision.

As an option, we offer an impact safety partition which is mounted close by, and reinforces, the bulkhead. In the event of a rear-end collision, it absorbs the loads from the double floor solution to further protect the driver and passenger. 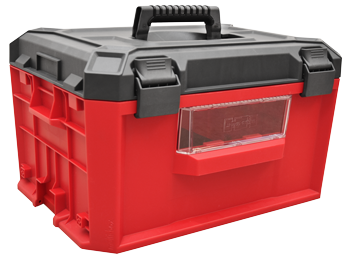 The Modul-System accessories are innovative products that have been specifically developed for use with the Modul-System range. By adding accessories, you can extend the functionality of the racking system and make your workspace even more efficient. 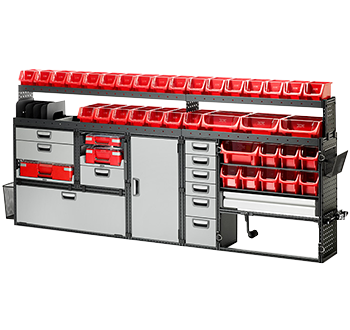 Modul-System is vastly experienced in producing lightweight steel racking systems. We were the first in our industry to introduce high strength steel (HSS), and later ultra-high strength steel (UHSS), into our products. By using this high-tech material, we have been able to reduce the weight of our products even further, while the solutions remain extremely robust and collision-safe.

When steel is lighter than aluminum and plastic

Are you struggling with payload? Considering switching to another material to reduce the weight of the racking system? If so, you might want to reconsider.

We have carried out a direct comparison between the current Modul-System racking and what the equivalent modules would weigh if produced in another material. Sustained load capacity was a prerequisite.

In conclusion, the system would weigh approximately the same if produced in aluminum, and would be considerably heavier if produced in plastic/composite or mild steel. 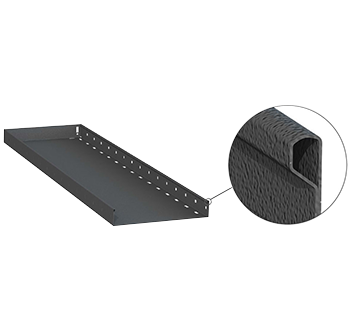 On the market today, there are many different steel qualities with different properties. The optimum steel for the job depends on what the product will be used for, and which properties it should have.

However, designing in ultra-high strength steel is not as easy as it might sound. To get good rigidity with thinner steel, it normally requires modifying the shape.

For example, the Modul-System shelves have a rolled edge that counteracts flexure (bending). This patent-pending design allows for a weight reduction of up to 40% compared with the equivalent shelf in mild steel.

Are you struggling with payload? Considering switching to another material to reduce the weight of the racking system? If so, you might want to reconsider.

We have carried out a direct comparison between the current Modul-System racking and what the equivalent modules would weigh if produced in another material. Sustained load capacity was a prerequisite.

In conclusion, the system would weigh approximately the same if produced in aluminum, and would be considerably heavier if produced in plastic/composite or mild steel.

All steel, regardless of strength, has identical density and e-modulus. This means that products of the same size and shape, whatever the grade of steel, will weigh as much and bend as much when loaded. The difference between them is their strength, where an ultra-high strength steel can bear up to 6 times the load of an equivalent product of aluminum.

Select your make of van below to view our range of pre-defined racking, flooring and lining kits.