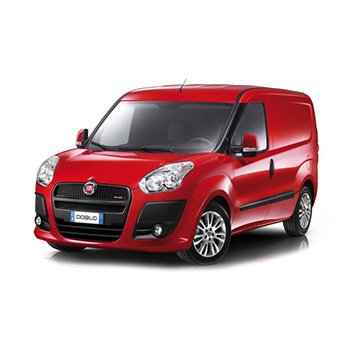 We offer a wide range of racking and shelving options for the Fiat Doblo. If you know what you’re looking for, you can browse our range of premade racking kits designed to fit the Doblo as well as a wide selection of shelves and accessories by selecting your model variation below. If not, we also offer a FREE design consultancy service where we build a 3d model plan of your van with racking - find out more

The Italian automobile manufacturer, Fiat have been building cars since 1899 and soon became Europe’s largest car manufacturer. Throughout that long history, Fiat have been built a reputation for producing small city cars and having some of the lowest level of CO2 emissions for vehicles sold in Europe. The Fiat Doblò is a panel van was produced by Italian automaker since 2000, using the Fiat Strada platform.

Back in in 2006, the First generation (2000–2009) Fiat Doblò received International Van of the Year. The all new Doblò van Second generation (2010–present) has had several makeovers and Fiat added more wheelbase and roof options to create a larger family of light commercial vehicles. In 2018 Fiat’s Professional Doblò Cargo scooped WhatVan?’s Light Van of the Year Award for the third consecutive time.

In panel van format there are now four versions of the Fiat Doblò from the standard van offering a load volume 3.4m³, while payload varies from 750kg to 1,005kg. The Maxi Van boasts with a generous 1,005kg payload capacity, a High Roof Van and XL Van, which is as big as some medium vans. The Doblò van is also sold by General Motors European Opel and Vauxhall brands as Combo - read more