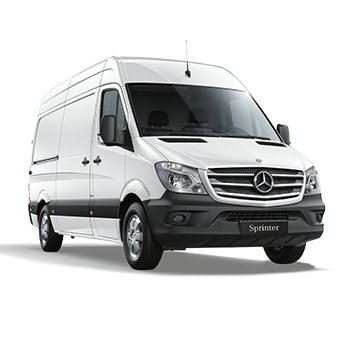 We offer a wide range of racking and shelving options for the Mercedes Sprinter. If you know what you’re looking for, you can browse our range of premade racking kits designed to fit the Sprinter as well as a wide selection of shelves and accessories by selecting your model variation below. If not, we also offer a FREE design consultancy service where we build a 3d model plan of your van with racking - find out more

The global automobile manufacturer Mercedes-Benz has nurtured a reputation for producing luxury cars, buses, vans and lorries. Founded under the name of Daimler-Benz in 1926, the German company can be traced back to Karl Benz, who in 1886 made Benz Patent-Motorwagen, which is widely regarded as the first automobile. The Mercedes-Benz Sprinter is a light commercial van introduced in 1995 to replace the famous but outdated Mercedes-Benz TN van. It was voted International Van of the Year for 1995.

Following the first generation (1995–2006), the Sprinter van (2006–2018) second gen was introduced in Europe in 2006 and voted Van of the Year 2007 and again in 2008 by Professional Van and Light Truck Magazine. More recently, in the What Van? Awards 2014 the Mercedes-Benz Sprinter won the Large Van category and took top spot in the Safety Award for 2014, recognising the high degree of safety the Sprinter van offered.