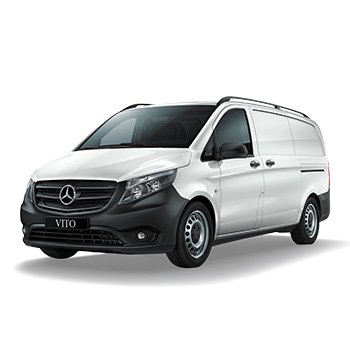 We offer a wide range of racking and shelving options for the Mercedes Vito. If you know what you’re looking for, you can browse our range of premade racking kits designed to fit the Vito as well as a wide selection of shelves and accessories by selecting your model variation below. If not, we also offer a FREE design consultancy service where we build a 3d model plan of your van with racking - find out more

The first generation (W638; 1996–2003) Mercedes Vito was also sold as the V-Klasse in more luxurious version, which went on to be replaced with the Viano, the name for the second generation (W639; 2003–2014) of Vito. When the Mercedes-Benz Vito third gen (2014–present) was introduced the changes included standard Attention Assist and Crosswind Assist as safety features. Mercedes-Benz is one company that has been at the forefront of such developments, which is why What Van? awarded their top Safety accolade in 2016 with the Mercedes-Benz Vito winning What Van? 2016 Safety Award.

As a medium sized van, there is a Mercedes Vito to suit every business or professional tradesperson, with a choice of three lengths and a selection of engines - read more