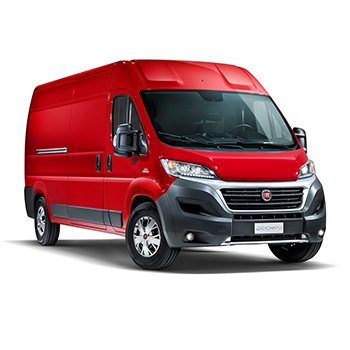 We offer a wide range of racking and shelving options for the Fiat Ducato. If you know what you’re looking for, you can browse our range of premade racking kits designed to fit the Ducato as well as a wide selection of shelves and accessories by selecting your model variation below. If not, we also offer a FREE design consultancy service where we build a 3d model plan of your van with racking - find out more

The first Fiat plant opened in 1900 in Turin, when the Italian automobile manufacturer had just 35 staff producing 24 cars. Fiat soon became known for the talent and creativity of its engineering staff. The Fiat Ducato van and has been produced since 1981 as a joint venture between Fiat and PSA Peugeot Citroën.

The Fiat Ducato is one of the most capable large vans you can buy and available in an extensive range of body styles, sizes and payload options to suit many professional uses. This is just one of the reasons it won 'Large Van of the Year in 2018' in the Honest John Awards. The Fiat Professional Ducato was also named Fleet Van of the Year in the Motor Transport Awards 2017 by a panel of 50 expert industry judges.

The Fiat Ducato has also been sold as the Citroën C25, Peugeot J5, Alfa Romeo AR6 and Talbot Express for the first generation, while the second and third generations were marketed as Fiat Ducato, Citroën Jumper, Peugeot Boxer and as the Ram ProMaster in the United States and Canada for the third generation since 2013.