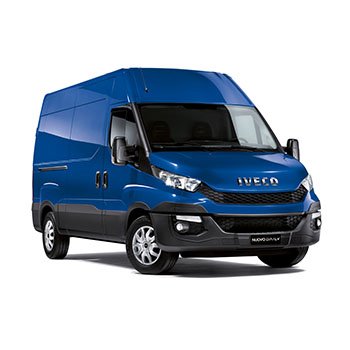 We offer a wide range of racking and shelving options for the Iveco Daily. If you know what you’re looking for, you can browse our range of premade racking kits designed to fit the Daily as well as a wide selection of shelves and accessories by selecting your model variation below. If not, we also offer a FREE design consultancy service where we build a 3d model plan of your van with racking - find out more

As a relative newcomer, the Italian industrial vehicle manufacturer, Iveco was incorporated in 1975. In a merger of Italian, French and German brands, Iveco now produce commercial vehicles worldwide from their production plants in Europe, Brazil, Russia, Australia, Africa, Argentina and China. The Iveco Daily is a large light commercial van first produced in 1978. It was also sold as the Fiat Daily by Fiat until 1983.

Now in it's sixth generation (from 2014), the Iveco Daily won 'Large Van of the Year' for three consecutive years; 2015 to 2017 in the What Van? awards. Then in 2018 Iveco Daily Blue Power won International Van of the Year, where Iveco were praised for producing a new range of highly sustainable light commercials. Celebrating it's 40th anniversary in 2018, the Iveco Daily has come a long way from the first generation in 1978 which offered two models, the 35 and the 50 (3.5 and 5.0 tons). Today's Daily van has been praised for it's versatility and is a popular choice for parcel and courier services, through to heavier transport needs.

The Iveco Daily van offers a wide range of wheel bases, roof heights and rear overhangs which result in a vast range of cargo volumes, with the Daily the only van offering cargo volumes from 7.3 m3 right up to the unique 19.6 m3.